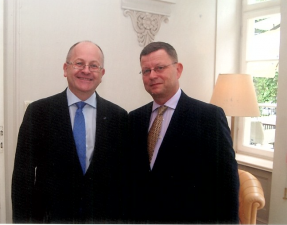 On 13 May 2014 the Honorary Consul of Iceland Boguslaw Szemioth, in common with female representatives from Islandic Student Club Ms. Emiliana Konopka and Ms. Anna Czapiel met with a representative of the Embassy of the Republic of Iceland in Berlin. During the meeting, the issue was cooperation with the Embassy and with the association of Iceland lovers in Germany.

9 May 2014, Honorary Consul of Republic of Iceland Mr.Bogusław Szemioth had the pleasure to host representatives of the Islandic Student Club Ms. Emiliana Konopka and Ms. Katrzyna Petruk. The meeting proceeded in a very nice and friendly atmosphere, and during talks they were discussing about cooperate, including Consul patronate of events promoting the culture of Iceland.